I connected with Molly Burhans for the first time right on Park Street, in front of Saint Thomas More Chapel. It was shortly before a Sunday afternoon Mass, and we were both locking our “mules” (I, my bike and Molly, her scooter)to the parking meter in front of the Chapel. It struck me that since we both seemed dedicated to sustainable ways of transportation as well as to Mass attendance, our lives must be sharing some core commitments. So, I introduced myself, and thus began my friendship with Molly. In what follows, I highlight some of what I learned about her and her incredible work, as she shared this with me in an hour-long conversation. 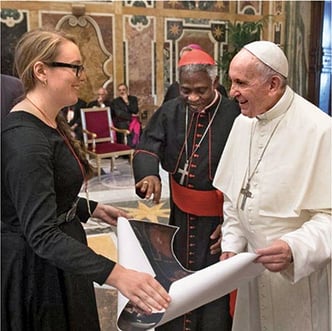 Molly shares one of her maps with Pope Francis at the Vatican.

Molly is the Founder and Executive Director of GoodLands, a nonprofit organization that maps the landholding of the Roman Catholic Church globally. More specifically, GoodLands contracts with Catholic communities to help them map and create land records for their property portfolios. They then use that understanding to analyze and optimize their property’s use and management for environmental and social impact as well as financial management. Molly’s journey into this work—and by extension to the community that is STM—is remarkable, not least in the way in which her different skills and passions came together. For starters, there is Molly’s faith, which she (re-)turned to in college. This faith takes inspiration, in part, from the Catholic Worker Movement, and in another part from a contemporary community of women religious. Add to this her immersion, since childhood, in science and research generally (her father Bill, was a cancer researcher), and in computer science, coding and data gathering (Molly’s mother Deb is a computer scientist). Last but not least, there is Molly’s love for nature, for the land and for ecology, a love that was nurtured professionally at The Conway School of Landscape Design where she received a Master’s Degree in Ecological Design.

These diverse skills and passions converged brilliantly when Molly discovered that the Catholic Church was not only one of the biggest land-owners globally, but had never really done any land inventories to date, certainly not on a global scale. Molly set out to prepare the first ever global data-based map of the Catholic Church’s presence, with support from a cartography team at Esri (the world’s leading company in geographic information systems [GIS] technology). She premiered her map in Rome in December 2016 at the Vatican Arts and Technology Council. Since then, she has had several audiences with Pope Francis and has personally presented him with maps. In the summer of 2018, the Holy See offered her an office in the Vatican, and she is currently renegotiating the terms for establishing a Cartography Institute. This institute would make maps for various Vatican departments and convene working groups for security and policy, definitions and ontologies and establishing the workflows for authoritative ecclesiastical boundary data sets several times per year. 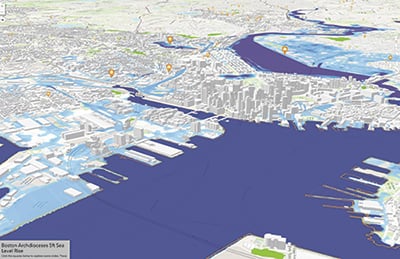 Molly combines her cartographic expertise with a love of the land and a commitment to ecological planning. To put it succinctly, Molly wants the Catholic Church’s vast land-holdings to work “for good.” 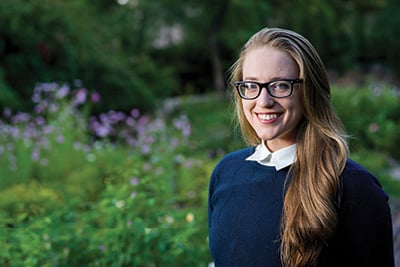 Molly was recognized as a Young Champion of the Earth by the United Nations’ Environment Program. Her organization GoodLands is the first faith-based organization to receive this recognition. Photograph courtesy of Molly Burhans.

Since 2015, Molly’s initial vision and her sense of urgency have only grown. In the process, she has moved her organization and herself to New Haven, CT, not least because she had already been working with students at the Yale School of Forestry and Environment. GoodLands has an office on Front Street in Fair Haven and has completed a global mapping of the Catholic Church’s jurisdictions as well as created a vast database that includes statistics about the world’s Catholic populations, buildings and property-scale data for the United States Council of Catholic Bishops.

Recognition of Molly’s work has been fast and wide-spread: she was a 2018 Ashoka Fellow and has been featured in, among others, the Boston Globe, and America magazine. And this fall, Molly was recognized as a Young Champion of the Earth by the United Nations’ Environment Program. Her organization GoodLands is the first faith-based organization to receive this recognition.

Yet there is more than a passion for mapping behind GoodLands. Molly combines her cartographic expertise with a love of the land and a commitment to ecological planning. To put it succinctly, Molly wants the Catholic Church’s vast land-holdings to work “for good.” Molly is inspired by the environmental work of Pope Francis. Laudato Si’ is a text that continues to inform her faith and provide a vision for GoodLands for many years to come.

And, Molly’s Young Champion of the Earth video: https://www.unenvironment.org/youngchampions/news/video/young-champion-earth-2019-molly-burhans