A Rich Tradition of Ministry

Catholic presence at Yale University has had a rich tradition of ministry since 1922, when Rev. Thomas Lawrason Riggs, a thirty-four year old newly ordained priest, was granted permission to take up residence at Yale University at his own expense. When he began his ministry in 1922, the Catholic presence at Yale was minimal. The number of Catholics in the student body, despite a dramatic jump in the years after World War I, totaled about 300 of a total enrollment of 3,930.

His intelligence and personal charm won him a dedicated band of student disciples. From each class he attracted a handful of admirers who served his Masses, dined at his home, and worked diligently for the Catholic Club. After graduation these devoted followers assumed their places in a Catholic intellectual elite. Many of them spearheaded the drive that raised over $200,000 to build Saint Thomas More House and Chapel.

Today, Saint Thomas More Chapel (renovated in 2008) and Thomas E. Golden, Jr. Center (built in 2006) are award-winning, magnificent spaces that exemplify our ministry’s commitment to excellence. More than just a beautiful building, The Thomas E. Golden, Jr. Center is a statement that Catholic life has come of age on Yale’s campus. The center, designed by world renowned architect and former Dean of Yale School of Architecture, Cesar Pelli of Pelli Clarke Pelli, is located across from the Pierson gateway.

Today, of the 65% of the new students who returned their religious information cards back to the Yale Chaplain's Office, an average of 29% self-identified as being Catholic, making Catholicism the single largest religious denomination on Yale's campus. 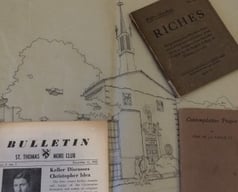 We invite you to visit the Riggs Archive, housed in the Vincent Library office, Room 203. You may also learn more about STM’s rich history in our digital archives.

Podcast: Synod reports from all over the world are in. What happens next?

Misunderstanding the Rise of the Nones