Reflecting on Numbers and the Pandemic 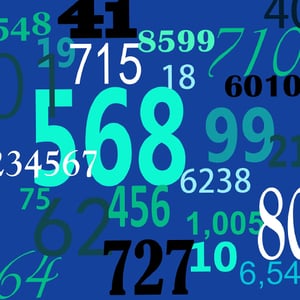 I’ve been noticing numbers a lot recently. A friend in college, an accounting major, would calculate the number of ceiling tiles in each classroom or auditorium when he got bored. When the musical “Rent” first hit Broadway, theater friends would constantly sing, “Five hundred twenty-five thousand, six hundred minutes. Five hundred twenty-five thousand moments so dear. Five hundred twenty-five thousand, six hundred minutes. How do you measure, measure a year?”[1] In case you did not know the number of minutes in a year, you did after hearing that song multiple times. Several parodies of the song have been written since the beginning of the COVID-19 crisis, which will probably become a reality as we anxiously wait a year or longer for a vaccine to be created and distributed.

This time of a pandemic has kept us focused on numbers. Whether it is flattening the curve (bringing the numbers down), 14 days of quarantine, the number of ICU beds in hospitals, how many weeks stay-at-home orders are in effect or what phase of re-opening we are in, numbers have been increasingly important. Unemployment numbers are rising, as is the number of people who are in need of food. New Haven has seen 100 deaths from COVID-19. New Haven County has reached 1,000 deaths and the United States has topped over 100,000.[2] The New York Times published 1,000 names on the front page of the paper on Pentecost Sunday, just over a week ago, to represent 1/100th of the people who have lost their lives to the pandemic.[3] People of color are disproportionately represented in the number of deaths, as they are dying at a much higher rate than white Americans.

Numbers are important, but each of those numbers represents an actual person. Early on in the outbreak, I was exposed to a few people who tested positive for COVID-19. Waiting at home for the 14 days of quarantine to end was annoying and a little frightening, as I hoped and prayed that I wouldn’t develop symptoms. For the people I knew, numbers were focused on temperatures, oxygen levels and days spent in the hospital or in isolation from their families at home. Their numbers meant the difference between resting comfortably and fighting to survive. These were people that I know and have conversations with - they were not just statistics, but people who were going about their daily lives. They came across someone who was infected and became sick with what was then a virus that wasn’t understood very well. They then became identified with the number of positive cases in the city, county and country.

As we moved from Pentecost into Ordinary Time, the names behind the numbers were like those mentioned at the Pentecost event. A few who were specifically mentioned represented the experience of so many who were then sent out in mission. Similarly, the few names we know or are published represent the 100,000 men and women in the U.S. as well as the 302,000 others globally who have perished.[4] If you don’t personally know someone who has died of COVID-19, look at the New York Times and pray for one of the names – and consider the 100 other people the published name represents. As you see the number of cases continue to grow, remember that individual actions have impact on numbers and the lives of people.  Make decisions to work for the common good of all.

Numbers are important in Scripture. They are highly symbolic, such as the number 3 and 7, meaning perfection and completion. The number 12, and its multiples, represented the entirety of the known world. What is in Scripture has sometimes been carried down in tradition. The idea of university faculty getting a sabbatical every seven years comes from the idea of Sabbath, or the seventh day. Three leaf clovers, or shamrocks, as symbols of faith, hope and love are connected to the Irish tradition of a clover being used by St. Patrick to teach the Trinity. Some of this may be more mythology than history, but tradition comes in many forms. Possibly also folklore, but there is a saying that, “death comes in threes.” I’ve heard it more in my Irish-American religious community than in previous locations, but whenever a sister dies, there is always a little uneasiness, knowing two others will as well. Death came in threes for the country over the past month. It was the perfect trinitarian storm to remind a nation of the value of Black and Brown lives. Ahmaud Arbery, Breonna Taylor and George Floyd: The trinity of innocent lives crucified by overtly racist white men. Eight-minutes and forty-six seconds: the number of moments it took for a life to end. 50 states and 18 countries: the number of places that protested the deaths of Black bodies over the past week. 5,000: the number who were fed by Jesus and the disciples and the number who gathered in New Haven to protest police brutality this past Friday. “Give them something to eat,” was satisfied with bottled water and granola bars, or, more often, what was really needed in that situation – masks and hand sanitizer.

St. Catherine of Siena said, “Speak the truth as if you had a million voices. It is silence that is killing the world.”[5] A million voices have spoken about the two pandemics centered in the United States, but which are still rippling throughout the world. One can be prevented with social distancing, masks, and clean hands. The other requires unlearning and disentangling the racism that is embedded in our minds, hearts and culture. With the COVID-19 pandemic, the numbers of cases were being reported constantly, with the NY Times providing names and stories to associate with those numbers. With the pandemic of racism, we have three names that represent the countless others who aren’t recognized as a name or a number. According to the Washington Post, so far in 2020, of the 24 unarmed people killed by police, 14 were non-white. Since the beginning of 2015, out of the 353 total unarmed people killed by police, there have been 208 that are non-white.[6] Many other western countries have not had any deaths due to police violence. During the march on Friday, I saw a young girl sitting by the side of the road with a chalkboard sign. On it was written, “I want to live, so I can be more than a hashtag.” I truly hope and pray that the young girl can become famous for more than being a hashtag after her death.

The pandemics of COVID-19 and racism are about disease of the body and disease of the heart. They are also about the disease of a society that has forgotten about the common good, the dignity of the human person, and that has set up systems that benefit some over others. They are about the disease of not seeking or speaking truth. They are about the disease of uninformed or unwise leaders spreading untruths. Because both of these diseases are global pandemics, they have received international attention. In bringing them to the light, we may find a cure for each. It will take a lot of work and collaboration, close examination of the problem, and lots of trial and error. May we stay focused on how we can contribute to the common good of all through our participation in being a cure through our prayer, education, and local and global involvement. May we listen to the experts who may or may not look and sound like us. May we “speak as if we had a million voices,” but only after we have listened, fact-checked, and examined our role in the pandemics. May we join in the call to work with God and others for the common good of all of creation.