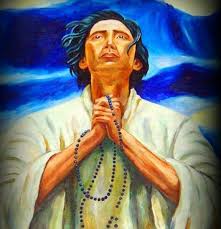 I was 11 or 12 years old when I first heard of San Lorenzo Ruiz. It was the name of a society founded by my parents and a few other families back at our home parish in New Jersey. The hope was to help create a community that highlighted the Filipino Catholic experience within our parish. I did not know much about him aside from the fact that he was the first Filipino saint.

Ruiz was born in 1600 in Manila to a Chinese father and Filipino mother. Deeply devout, Ruiz was involved in his church from a young age as an altar server. Happily married and a father to three children, Ruiz lived both an ordinary and fruitful life. However, in 1636, Ruiz was accused of murdering a Spaniard. Fearing for his life and safety, he fled with three Dominican priests, with the hope of finding safety.

Ruiz and his priest companions instead made their way to Japan, where at this time Christians were being persecuted by the Tokuagawa Shogunate and tortured to death should they not renounce their faith. Ruiz and the priests were captured and subjected to extremely painful torture in Nagasaki. They remained resolute in their faith -- Ruiz alongside the priests eventually dying as a result of the torture. In 1987, Ruiz became canonized by Pope John Paul II and we celebrate his feast day on September 28th.

Of all the moments that marked Ruiz’s life, I am taken aback by the ways in which we see Ruiz’s life affected by some of the same systems of oppression that we witness today. Ruiz was a FIlipino-Chinese, and at that time Filipino-Chinese folks were seen to be at the bottom rung of the socioeconomic ladder in the colony. The crime that Ruiz was falsely accused of involved two drunk Spanish sailors who engaged in a bar brawl and Ruiz, given his race, was the perfect target for blame. We know too well that this is not an uncommon phenomenon.

So, as I think and reflect on the ways in which Lorenzo Ruiz’s life continues to hold an impact -- I do not think of his martyrdom. I reflect on the ways in which systems of socioeconomic and racial forms of oppression by the Spanish led to Ruiz’s decision to leave his home and his family. I reflect on the ways in which people who are often on the margins of society are sometimes forced to make impossible decisions, like leaving the ones that they love most and the places that they call home to keep them safe. Unfortunately, it is not so much different today. When I think of Lorenzo Ruiz, I admire his fortitude in his faith, I admire his ability to make an extremely painful decision on behalf of his family. But I also do grieve. I grieve for the ways that racism and classism profoundly transformed his life. I look forward, I hold his life and legacy, knowing that his story is intertwined with my own, that the story of fortitude, resilience, and sacrifice live too in my own body. For that, I am grateful.

The Feast of San Lorenzo Ruiz de Manila and Companion Martyrs is celebrated by the Catholic Church on September 28th.

The Parable of the Saunterer: How To Take It Slow and Enjoy the Journey

St. Catherine of Siena, Patron Saint of Women Who are "Too Much"